Back to Earth or Temporary Setback? Revisiting the FANGAM Stocks

It has been a rocky year so far, in 2022, with worries about inflation competing with hopes about recovery for the market’s attention. In the midst of all the action, to no one’s surprise, have been six stocks (Facebook, Amazon, Netflix, Google, Apple and Microsoft or FANGAM) that have largely driven US equities for the last decade, roiling the market with their most recent earnings reports. Netflix and Facebook saw drops of 20% or more in market capitalization, following negative earnings reports, but Amazon and Google beat market expectations. In this post, I will be valuing each of these companies, both to assess whether to invest in them individually, and to examine whether there are lessons for the market in their price entrails.

Over the course of the decade (2010-2019), the FANGAM stocks increased in collective market capitalization from $719 billion from $5.07 trillion, and their share of the overall equity value of all US stocks also surged from 6.5% to 14.9%. It is not hyperbole that without these stocks, the last decade would not have been a great one for US equities. Coming into 2020 in a position of strength, these companies got stronger, as COVID rocked economies and  markets in 2020, which became the headline for one of my posts on COVID: 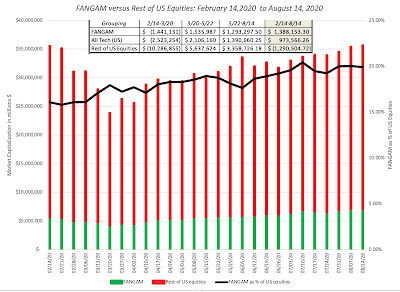 Between February 14, 2020 and August 14, 2020, as markets first collapsed and then recovered just as strongly, the FANGAM companies collectively added $1.39 trillion in market cap, accounting for all of the recovery in US stocks during that period. I have valued each of FANGAM multiple times in the past, but my most recent attempt to value each of them was in September 2020, as one of a series of posts highlighting how COVID was playing out in markets. I wanted to see if that surge, added on to the trillions in the market cap of US equities between 2010 and 2019, had left them in nosebleed territory, in terms of value. I must admit I was surprised by my own valuations, since, given the low riskfree rates prevailing at the time, only one stock (Apple) looked significant over valued. Of the rest, Microsoft and Amazon were over valued, albeit by modest most amounts, and Facebook was the most undervalued, and Netflix and Google were close to fairly valued.

At the end of that post, I disclosed that I owned Facebook, Microsoft and Apple, and that I would continue to hold the first two, and would sell my Apple shares.  Clearly, much has happened since these valuations. The market has continued its march upwards, these companies have had multiple earnings reports and each of them has had newsworthy events occur.

In the eighteen months since I valued these companies, much has happened, to the economy, to US equities collectively, and to these six companies, in specific. In the graph below, I report on the collective market capitalization of US equities, broken down into three groupings, the FANGAM stocks, all other US tech companies and the rest of the US equity market, from August 31, 2020 to February 9, 2022: 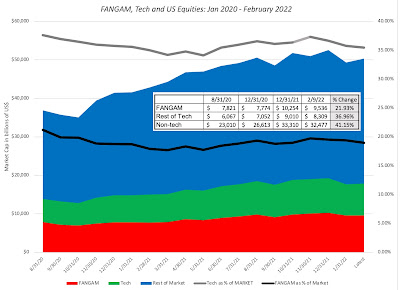 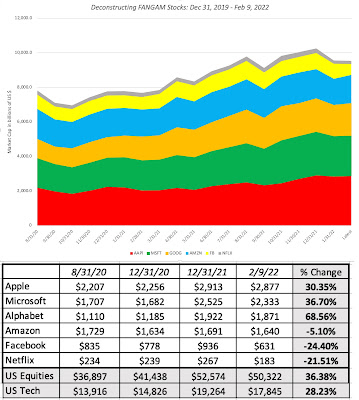 During this period (8/31/20-2/9/22), three of the FANGAM stocks (Apple, Microsoft and Alphabet) were up strongly, and three (Amazon, Facebook, Netflix) were down.  In summary, the FANGAM stocks were up collectively between August 31, 2020, and February 9, 2022, but they lagged the rest of the US equity market, with that underperformance isolated to Amazon, Facebook and Netflix.

Since I last valued the FANGAM stocks in September 2020, there have been six quarterly earnings reports from each of these companies, and I report on two key operating measures, revenues and operating income, in the table below, for the last three fiscal years for each of the companies. (Note that four of these companies have calendar year-ends, and two have fiscal years that end mid-year. For the latter, I am reporting on the trailing 12-month numbers, to ensure that I have the calendar year numbers.)

Looking at the percentage changes in revenues and operating income between 2019 and 2021 gives us a measure of how well each of these companies have navigated the currents of the last two years, and they seem to have turned the troubles to their advantage, posting strong compounded annual growth rates in revenues and operating income. These consolidated growth numbers, though, don’t reflect the trend lines over the three years at these companies. Facebook and Netflix stumbled in their most recent earnings releases, losing more than a fifth of their market capitalization. With both companies, the user numbers were the basis for the negative surprises, with Facebook reporting its first drop in user number on a quarter-to-quarter basis as a public company and Netflix reporting underwhelming subscriber growth. Amazon and Google reported stronger than expected growth in both revenues and operating income, in the most recent quarter, and Microsoft and Apple delivered close to expected numbers.

The FANGAM six, by virtue of their market capitalizations and their presence in our daily lives, have been also among the newsworthy of companies, and a significant portion of the news stories have are only mildly connected to current operating numbers. If I were to summarize the news about these companies in the last eighteen months:

Valuing these FANGAM stocks reinforces the truth that valuing companies can never just be based upon the financials, since all of this news will play out eventually in the valuation stories (and valuations) of these companies.

In the trading game, where pricing is driven by mood and momentum, earnings reports and news stories are scanned for incremental news, information that ultimately will have little effect on value, but can move prices substantially. That explains the fixation with earnings per share expectations, and why seemingly trivial surprises, where a company beats or falls short of earnings expectations by a few cents can cause the market capitalization of a company to increase or decrease significantly. If you have been reading my posts, it should come as no surprise to you that I believe in intrinsic value, but I also believe that intrinsic value is driven by narrative. To me, the value effect of earnings reports and news stories comes from how they change (or don’t change) the core narratives for companies. In keeping with that belief, I revisited my narratives for the FANGAM stocks, with the intent of revising these narratives, based upon what we have learned about these companies in the last two years:

Converting these stories into numbers, I revalued the six companies. You can download the full valuations by clicking here (Facebook, Amazon, Netflix, Google, Apple, Microsoft), but the summary of my key assumptions and valuations are below:

At the risk of repeating some of what I have said before, here is what the valuations tell me about these companies, as investments.

I came into the analysis holding Microsoft, and I will continue to hold it, though it is mildly over valued. If I still had Apple in my portfolio, I would also hold it, but since I don’t own it now, I have to wait for a price dip, and when it comes, I will buy it. I used to own Facebook, and while I sold it on its name-change, I will be getting back into the stock, at current prices, notwithstanding its muddled story line and near-term troubles, simply because of its cheapness. On Amazon, a stock that I have bought and sold four times over the last twenty years, I am glad to add it back to my portfolio. As for Google, I have never held it, to my regret, and don’t plan to add it on, at the current stock price. Finally,  I just don’t like Netflix, even at depressed prices, since I believe that scaling down content costs, key to the company’s future success, has become more difficult, not less, after the entry of Disney into the streaming wars. Needless to say, there is the broader question of the overall market, and how inflation will play out this year, but the answer to that question has a bigger effect on my overall asset allocation than on my judgment on whether to buy any of these stocks.

The Supreme Court is poised to strike down affirmative action and student loan forgiveness: These decisions would threaten college enrollment and completion for students of color