It has been my practice for the last two decades to take a detailed look at how risk varies across countries,  once at the start of the year and once mid-year. In most years, the differences between the two updates are small, and often ignorable, but this year’s update brings significant changes for many reasons. The first is the retreat of risk capital, which I talked about in my last post, not only affects the flow of capital and repricing of the riskiest assets (high yield bonds, money losing companies) within each asset class, but also has consequences for the flow of capital across geographies, with riskier countries feeling the effect more than safer countries. The second is that this has been a consequential year for country risk shifts, with Russia’s invasion of Ukraine upending risk not only for those countries, but also in the region, and tumult in Sri Lanka and Pakistan playing out as risk to investors in both countries.

An investment in Nigeria or Turkey clearly exposes a firm or investor to more risks than an otherwise similar investment in Germany or Canada, but why? Some of the differences can be traced to the stability  and growth prospects of the underlying economies, some to political and legal structures and some to geography.  Rather than provide a laundry list, I attempted to summarize the four key drivers of country risk differences in the table below:

Let’s start with political structure, i.e., the extent of political freedom and democracy in a country, a sensitive topic and one that is open to subjective measurements, and draw on a democracy index score computed by the Economist Intelligence Unit (EIU) every year, with the most recent one mapped below:

As the Economist noted, a third of the world’s population lived under authoritarian regimes and only 6.4% lived under full democracy, in 2021, with large differences across regions. From a business risk standpoint, though, the question of whether you would rather operate in a democracy or a dictatorship is a complicated one, with the former creating more continuous risk, as laws and regulations change, as elections often bring in new governments, and the latter more discontinuous risk, since regime changes, though less frequent, are often more wrenching and painful.

Second, a country’s risk profile can also be affected by its exposure to violence, from war, terrorism or internal strife, and the risks that ensue to businesses that operate in its midst, I looked at differences across countries, in July 2022, drawing on work done by the Institute for Peace and Economics:

Note that the peace scores were updated to reflect the Russian invasion of Ukraine and that the world’s hotspots became more violent in 2021 and 2022.
Third, corruption operates as an implicit tax, since business operating in corrupt parts of the world have to build in the associated costs and constraints. Transparency International measures a corruption score for countries, and the results of its 2021 iteration are mapped below:

Northern Europe is the standout, when it comes to being free of corruption, but corruption clearly is a drag on businesses in Latin America, Africa and much of Asia.

Legal protections for businesses are strongest in Australia and North America and weakest in Africa and Latin America.

While country risk has so many dimensions to it, there is correlation across the many dimensions, with corruption, poor legal protections, violence and political instability often moving in tandem. There are several services that attempt to estimate composite country risk scores, incorporating the multiple factors. One of my long-standing favorites is Political Risk Services, which measures a country risk score on a scale from 0 to 100, with lower scores indicating more risk and higher scores associated with safety: 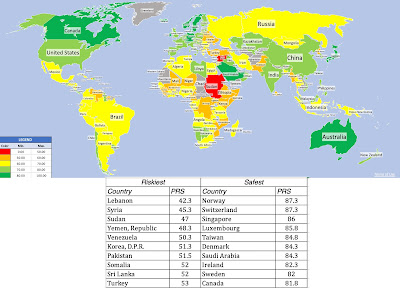 Based on the PRS composite risk measures, Africa remains the most risky region of the world for businesses to operate in, whereas Northern Europe, North America and Australia offer the most safety.

For investors, the most direct measures of country risk come from measures of their capacity to default on their borrowings. At the start of 2022, for instance, there were several countries that were in technical default, on at least portions of their debt, and the Russian invasion of Ukraine has exacerbated sovereign default concerns around the world: 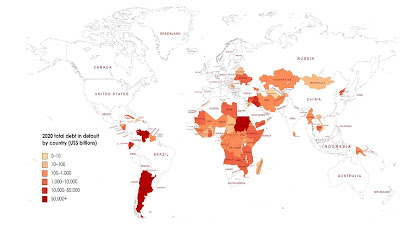 Note that this picture has been updated to incorporate Russia’s rating reassessment (downgraded to Ca in early April, before the rating was entirely withdrawn). I know that there are some of you, who distrust ratings agencies, arguing that they have regional and other biases and/or that they do not adjust ratings in a timely fashion. If you are in that group, the sovereign CDS market offers market-based and real-time measures of sovereign default risk, although for only 80 countries, and the map below reports the sovereign CDS spreads, as of June 30, 2022:

Comparing the sovereign CDS spread picture to the sovereign ratings picture, you can see the overlaps, with the ratings agencies and CDS market mostly in agreement. 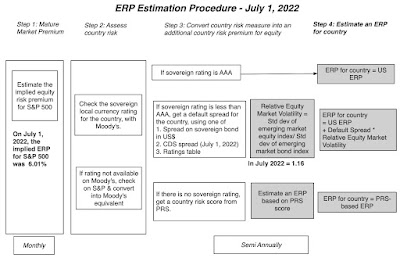 The equity risk premiums that result from this assessment are shown in the picture below, with a very rough attempt to break down countries geographically. (Please do not attach any political significance to my country groupings, or take them personally. I mean no disrespect to any country, and if you feel your country has been mis-grouped, I apologize.): 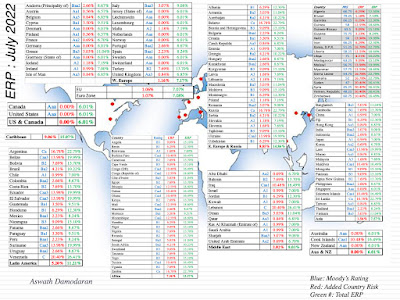 If you compare the numbers in this picture to the equivalent one that I reported at the start of the year, you can see the surge in risk premiums across the board, starting with a higher base premium (6.01%, up from 4.24%) for the US and higher spreads for country risk. Looking at individual countries, the graph below summarizes the countries that saw the biggest increases in equity risk premiums (on a percentage basis) over the six months (from Jan 1, 2022 – June 30, 2022): 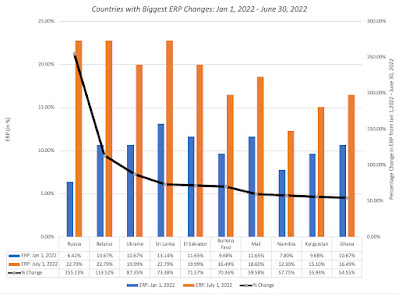 Not surprisingly, Russia and Ukraine make the list, with Russia’s equity risk premium almost tripling and Ukraine’s doubling over the period, but you can see the spillover effects into Belarus and Kyrgyzstan. There are three African countries that make the list (Namibia, Mali and Ghana), largely because of ratings downgrades, Sri Lanka’s downgrade reflects the implosion of its political system and El Salvador’s experiments with Bitcoin are not going well.

As a final part to this post, to see the shifts in country risk that we have seen in 2022, let’s start with an assessment of risk free rates. In my last post, I noted that concerns about inflation have played a big role in pushing up the US ten-year treasury bond rate from 1.51% on Jan 1, 2022, to 3.02% on June 30, 2022. That increase in interest rates is not restricted to the US dollar, as local currency government bond rates have risen around the world. In the graph below, I use these government bond rates as a starting point to estimate riskfree rates in multiple currencies, with adjustments for default risk in governments, using the sovereign default spreads from the last section: 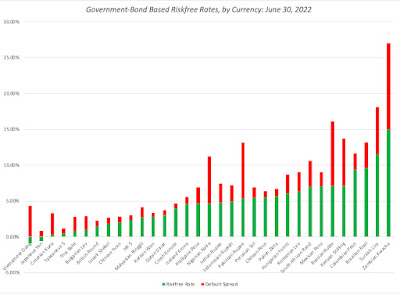 The biggest reason for differences in risk free rates across currencies is differences in expected inflation, with higher inflation currencies exhibiting higher riskfree rates. That said, the key to dealing with currency appropriately in valuation is to stay consistent, with cash flows and the discount rates incorporating the same expectations of inflation:

In short, changing the currency that you use to value a company should not fundamentally change your assessment of that company’s value, and the reason that it often does in practice is because analysts are often sloppy in their treatment of currency, mixing growth rates in one currency with discount rates in another, and real with nominal numbers. As a general principle, to prevent double or miscounting inflation effects and risk, each input into discount rates carries a specific component, with the riskfree rate being the conveyor of expected inflation, the relative risk measure (beta for equity, bond rating for debt) measuring the business and leverage risk of the company and the equity risk premium/default spread reflecting the price of risk in markets.

The combination of rising risk free rates (not just in US dollars, but also in other currencies) and surging risk premiums (default spreads and equity risk premiums) is pushing up corporate costs of capital. In the figure below, I graph the costs of capital for US and global firms, in US$ terms, on July 1, 2022: 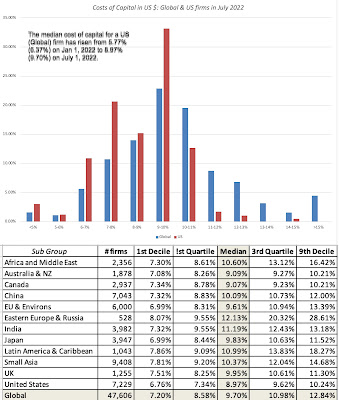 In January 2022, I had posted a similar histogram of costs of capital for global and US companies, reflecting risk free rates and risk premiums then, and the change, over the six months, has been extraordinary, with the median cost of capital for a US firm increasing from 5.77% to 8.97%, and for a global firm, from 6.37% to 9.70%.  As I look across the many posts I have had this year on how inflation is changing market pricing and psychology, I find myself drawing on one of my favorite Bob Dylan lyrics, “the times, they are a’changin'”. The biggest risk that we face, as we navigate our way through uncharted territory, is inertia, where we continue to do the things that have worked for the last decade, when we need to adapt and change.

The Supreme Court is poised to strike down affirmative action and student loan forgiveness: These decisions would threaten college enrollment and completion for students of color