More Monkeypox Vaccines Are Coming to NYC. Should You Get Vaccinated — And How?

Yves here. This post is instructive, but not in a good way. Keep in mind that despite the scary spectacle of New York City hospitals overloaded with Covid patients in March 2020, that was not the fault of the city but the result of Andrew Cuomo’s protracted and successful campaign to reduce the number of hospital beds city-wide. NYC distributed masks for free at subway stations and continues to provide free Covid tests (there are many stations). In other words, NYC is meaningfully above the low average you see for public health measures in the US. The fact that it is having trouble getting enough monkeypox vaccines despite being a big hot spot and therefore having to ration them is not a good sign.

This post also has some useful general information about monkeypox.

By Shantel Destra and Candace Pedraza. Originally published on July 21, 2022 at THE CITY

Workers sign in patients waiting to get a monkeypox vaccine at the Chelsea Sexual Health Clinic, July 11, 2022. Ben Fractenberg/THE CITY

The rollout of the monkeypox vaccine in New York City has been riddled with technical difficulties, communication issues and a major shortage of doses.

When the first 1,000 doses arrived at the Chelsea Sexual Health Clinic in early June, appointments were filled almost immediately. The people who booked them waited for hours in long lines at the clinic as the demand for the vaccine far exceeded the supply.

In early July, the New York City Department of Health and Mental Hygiene announced that 6,000 new doses of the vaccine had arrived — only to pause bookings because of appointment portal glitches. Health Commissioner Ashwin Vasan tweeted an apology for the tech mess-up, and said the city would “do better in the days and weeks ahead.”

As of July 18, a total of 616 people have tested positive for monkeypox in New York City. This is a significant jump from the previous week, when there were a total of 223 reported cases. 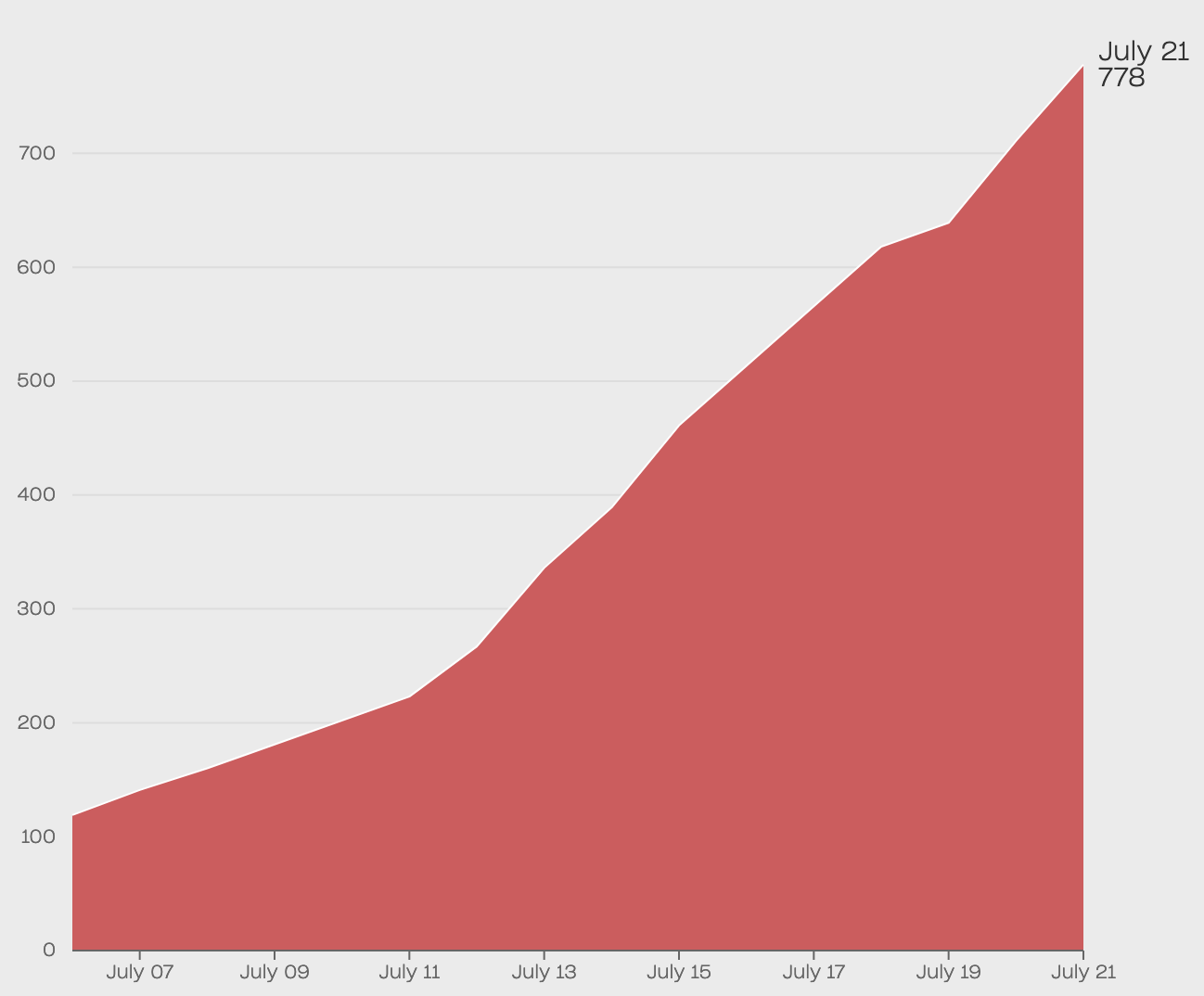 New York City currently has the highest number of monkeypox cases in the country, health department officials said at a July 11 town hall on the outbreak. State and city health officials have urged the federal government to send more vaccine doses.

State and city health officials have urged the federal government to send more vaccine doses, including in a letter Mayor Eric Adams sent to President Biden on July 11.

To cope with the shortage, the health department said on July 15 that it would prioritize just first doses of the vaccines “until we receive adequate vaccine supply.” According to the Centers for Disease Control and Prevention, the vaccine would ideally be given in two shots, four weeks apart.

With all the confusion, you may be wondering about the specifics of the contagious viral disease, who’s at risk, how concerned you should be and how to access the vaccine.

We’re here to help. Here’s a guide on what to know about the monkeypox outbreak:

Monkeypox isn’t new. It was first discovered in the 1970s, according to the World Health Organization and since then, cases have primarily been linked to international travel to places where the disease is common, including central and west Africa.

The cause of the disease — which is part of the orthopoxvirus family along with smallpox — is unknown.

The CDC has identified fever, headache, chills, and swollen lymph nodes as symptoms of monkeypox. Those infected are also known to have pimple-like rashes that may appear on the face, hands, feet, and inside of the mouth. The infection can last anywhere from 2 to 4 weeks.

How Does Monkeypox Spread?

During the city’s July 18 town hall, health commissioner Vasan said that we still don’t know if monkeypox can be spread by saliva, semen or vaginal fluids, or if infected people who are asymptomatic can spread it.

Many health experts who spoke with THE CITY said the disease’s spread is a cause for concern.

“Any number of health experts will tell you they could see the writing on the wall to know that increased community spread was going to happen,” said Christian Grov, professor at CUNY School of Public Health.

That spread, in turn, is an opportunity for the disease to “become better adapted to humans, and transmit more efficiently,” said Stephen Morse, a Professor of Epidemiology at the Columbia University Medical Center.

“These numbers are usually the tip of the iceberg,” said Wafaa El-Sadr, professor of epidemiology and medicine at Columbia University’s Mailman School of Public Health. “In all likelihood there are probably more people that are infected who haven’t been tested.”

Experts told THE CITY that more vaccine doses are needed, with El-Sadr adding that there’s a pressing need to inform the public about the ways the disease is transmitted and its symptoms.

Who’s Most At Risk?

Vasan said at the July 11 town hall that there is “nothing intrinsic about the disease” that makes it a bigger risk for those men, but rather that “this current outbreak happens to be concentrated at the moment — and that started this way — amongst social networks and sexual networks of gay, bisexual, and men who have sex with other men.”

Experts who spoke with THE CITY agree that having a targeted approach to vaccinate groups presently at a higher risk for contracting monkeypox may slow the spread of the disease.

According to El-Sadr, the city health department should “think creatively” in expanding vaccine distribution to sexual health clinics and other locations across the city, building off of lessons learned from the COVID-19 vaccination efforts.

“You can’t expect people to go to you. You’ve got to meet people where they are,” she said.

Where Can I Get the Monkeypox Vaccine?

As of the second week of July, monkeypox vaccines in New York City are being offered by appointment from the health department to people who meet all of the following criteria:

The vaccine is also being offered to people who’ve been informed by the health department that they’ve been in contact with someone with monkeypox.

A new round of vaccine appointments will open on July 22 at 6 p.m., the city health department announced.

To schedule an appointment, visit the NYC Department of Health website or call 877-VAX-4NYC. Be warned, however: the website has repeatedly gone down as it’s been overwhelmed by traffic.

As of July 13, the city health department said monkeypox vaccines will be available at the following locations:

An additional location, NYC Health + Hospitals/Gotham Health Vanderbilt on Staten Island, will be open on multiple days of the week soon.

There are two types of vaccines used to treat monkeypox: JYNNEOS and ACAM2000. JYNNEOS is the vaccine that is being made available by the city. It is approved by the FDA for prevention of monkeypox for people over 18 years old and is typically administered in two doses, four weeks apart.

You are considered “fully vaccinated” two weeks after receiving the second dose. However, as mentioned previously, New York City shifted to a “single-dose” strategy in mid-July to cope with a supply shortage.

The monkeypox vaccines, which are more commonly used to protect against smallpox, have been found to be very effective according to the CDC. Even if you have contracted monkeypox, the vaccine is still effective in preventing more severe symptoms.

The second vaccine sometimes used to treat monkeypox, known as ACAM2000, carries risks for pregnant and immunocompromised people, has serious side effects and requires multiple needle jabs, according to reporting by The Atlantic.

Why Are There So Few Vaccines Available?

The JYNNEOS vaccine is made by a small company in Denmark with a manufacturing facility that has been shut down since last August, The New York Times previously reported.

In late June, The White House released an outbreak response to distribute an initial 56,000 vaccines immediately to “jurisdictions with the highest number of cases and population at risk,” with 1.5 million vaccine doses following over the next few months.

At the town hall on July 11, Vasan and New York State Health Commissioner Dr. Mary Bassett and Vasan referred to New York City as the “epicenter for monkeypox” and complained that New York was not receiving an adequate supply of doses from Washington.

“We’ve gotten an allocation of 14% [of national vaccines] with 27% of the cases,” said Dr. Bassett. “But whatever these numbers are, there has not been enough vaccines. It’s clear that more vaccines are needed.”

THE CITY will update this story as more information becomes available.

California Holds Firm Against Truck Protests at Port of Oakland