Yves here. This failure to protect medical workers, via allowing the use of flimsy gowns in Covid settings, falls at the CDC’s feet, natch, although you have to read the underlying study from the American Journal of Infection Control to work that out.

The short version is that most hospitals use disposable gowns even though reusable gowns are cheaper over their life and more environment friendly. The reusable gowns do become less protective after a lot of washings, and there are reservations as to whether washing removes some contagions (it does not with Covid; if you think your clothes got Covid cooties, toss them in a hamper for >2 days. The Covid will weaken enough by then to not pose a hazard. Needless to say, hospitals aren’t set up to age used gowns).

One wonders how hospital industry execs got to the classification bodies to allow these chintzy gowns to be used at all. Since I’ve had the misfortune to be in medically intrusive situations a few times since Covid, every time the members of the team used proper surgical gowns, which were way sturdier than these “isolation” gowns. I’m astonished that nurses’ unions didn’t make a stink about them.

Disposable gowns designed to deflect the splatter of bodily fluids, used in thousands of U.S. hospitals, have underperformed in recent and ongoing laboratory tests and may fall short of safety standards, leaving health care workers with a greater risk of infection than advertised.

A peer-reviewed academic study, published to little notice amid the coronavirus pandemic, found that isolation gowns commonly worn in medical units or intensive care units ripped too easily and allowed about four to 14 times the expected amount of liquid to seep through when sprayed or splashed.

“I’m amazed that facilities are using them,” said study co-author Elizabeth Easter, a textile expert at the University of Kentucky, of the thinnest disposable gowns. “Because, technically, you can see through the fabric.” 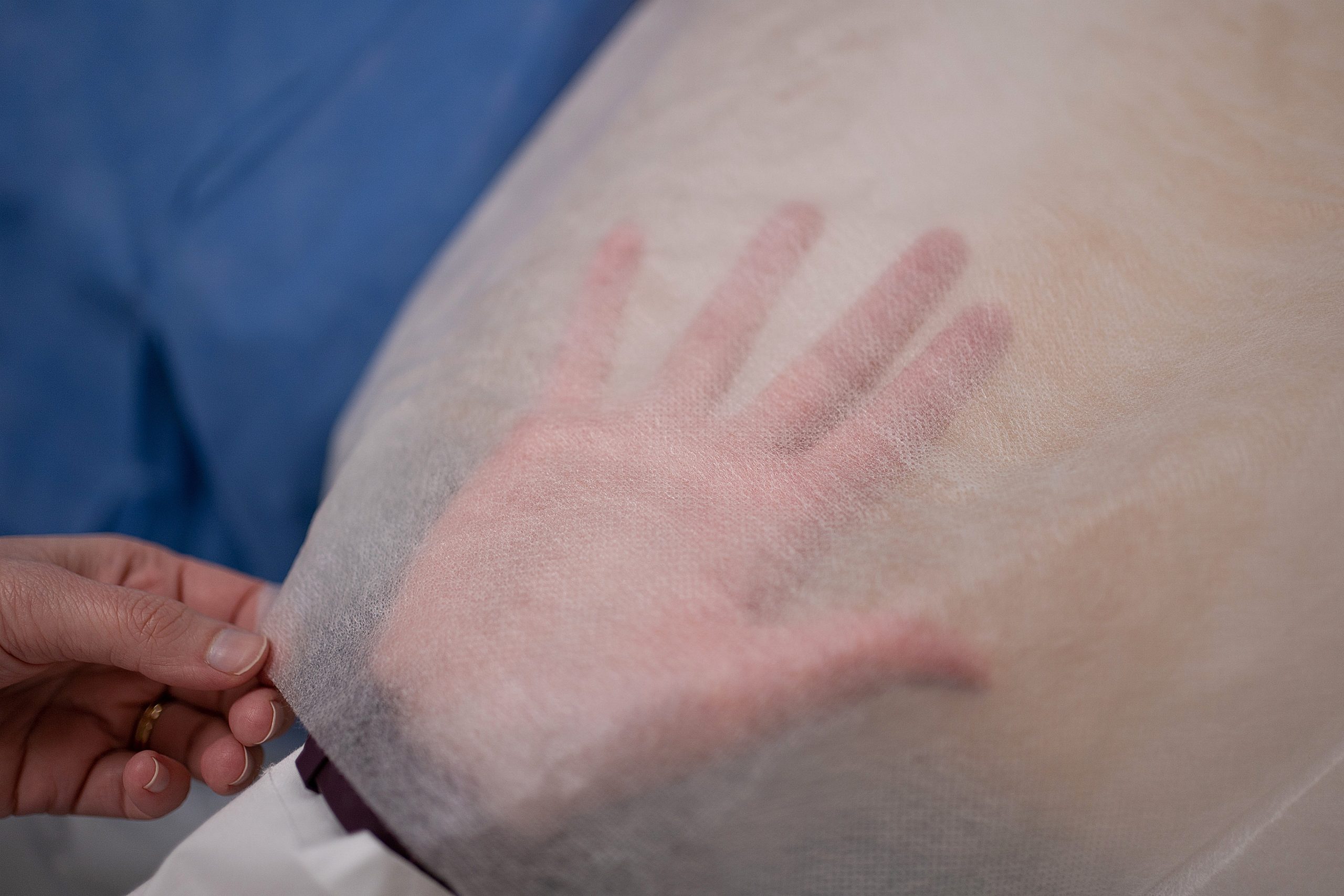 Karen Haberland places her hand under the see-through fabric of an isolation gown in the ECRI laboratory. (Caroline Gutman for KHN)

Isolation gowns are worn by hospital workers to cover their torso and arms before entering rooms of contagious patients, blocking the spray of fluids that could otherwise cling to workers’ clothing and end up in their eyes or mouth. Germs are thought to rarely seep through gowns and sicken the wearer, but with gowns used constantly in hospitals every day, even a small gap in protection could be magnified millions of times over.

“It’s an expected principle of infection control that you don’t want that body fluid getting through,” Lavanchy said. “A very reasonable expectation is that if you do get liquids through, there is a risk.”

Lavanchy declined to provide more details about ECRI’s findings, stressing that testing is ongoing. The organization is in discussions with gown companies that will get a chance to question or dispute the findings in advance of a full report’s release, planned for later this year. Neither ECRI nor the academic study identified the specific gowns or brands that were tested, but officials involved with both studies said the gowns were purchased from some of the primary suppliers of U.S. hospitals.

KHN reached out to three of the largest suppliers of hospital gowns for comment. None responded.

The testing of isolation gowns comes as the coronavirus pandemic has dramatically heightened concerns about infection control in hospitals and the limitations of supply chains for personal protective equipment, including gowns. Disposable gowns were a scarce resource in the first year of the pandemic, forcing some nurses to resort to wearing trash bags and some hospitals to hurriedly buy from manufacturers with no gown experience or foreign suppliers that did not meet U.S. standards. ECRI testing showed that many of these gowns offered lackluster protection, which drew attention to the lack of quality control in the gown industry, ultimately motivating the organization’s current testing of gowns from more traditional suppliers.

Supply shortages and questions about the quality of disposable gowns may persuade some hospitals to reconsider reusable isolation gowns, which can be laundered about 75 times. A handful of studies and pilot programs suggest reusable gowns offer at least as much protection and lower costs and are far better for the environment. Additionally, reusable gowns have been readily available throughout the pandemic, allowing hospitals to avoid supply shortages and surging prices.

Inova Health System, near Washington, D.C., transitioned two of its hospitals to reusable gowns in 2021 to insulate itself from supply chain woes and hopes to introduce the gowns at its remaining three facilities by the end of this year. Before the change, Inova used about 3 million disposable gowns in a year, creating 213 tons of waste, company officials said.

“There was a lot of trial and error going through this process,” said Michelle Peninger, Inova’s assistant vice president of infection prevention and control. “But it will all pay off in the end.”

Chana Luria, who has worked as a nurse in California for about 30 years, said she has long preferred the washable gowns that were common in the first decade of her career. They felt thicker, safer, and far less wasteful, she said. Fluid that splashed onto those gowns would slide to the floor ― sometimes creating a slipping hazard ― but never seeped through to her clothes or skin, she said.

Many nurses favor disposable gowns because they have a reputation for being cooler and more breathable, Luria said, but infection control should be prioritized over comfort. “I would rather be sweating in a Hefty bag and have some sort of actual protection,” Luria said. “It’s called personal protective equipment. If it doesn’t protect you, it’s a waste of time.”

‘We Were Spending Millions of Dollars on Gowns’

Regardless of whether they are washed or trashed, isolation gowns are often worn for mere minutes.

And all those minutes add up. At UCLA Health, a four-hospital chain in the Los Angeles area that transitioned to reusable gowns over the past decade, a single liver transplant unit once used as many as 1,000 disposable gowns a day, said Norm Lantz, senior director of general services. “We were spending millions of dollars on gowns,” Lantz said. “And then we realized, of all that money, what we were buying was filling landfills.”

Most isolation gowns are classified as either “level one” gowns, designed to be worn in standard medical units and during basic care, or slightly thicker “level two” gowns, which are worn in ICUs and during blood draws and suturing, according to the FDA. The agency recognizes standards for isolation gowns created by three organizations ― the American National Standards Institute, the Association for the Advancement of Medical Instrumentation, and ASTM International ― but there is no independent check to ensure gowns adhere to these standards.

Unlike surgical gowns, which are subjected to more scrutiny, isolation gowns are classified by the FDA as low-risk medical devices that are exempt from government review before sale. Gown companies are largely responsible for their own quality control.

But disposable isolation gowns fell far short of industry standards in the recent academic study, conducted by Easter and a textile-testing expert at Florida State University and published in the American Journal of Infection Control in 2021. The tests were performed in 2018, before pandemic shortages eroded the quality of available gowns.

To test the gowns’ ability to repel bodily fluids, the researchers sprayed them with water using something akin to a showerhead and determined whether the weight of the blotter paper on the other side of the protective material increased.

Both levels of disposable gowns also failed to meet a standard for tensile strength, which was not recognized by the FDA at the time of testing but has been since. The gowns were expected to withstand at least 7 pounds of force. But when pressure was applied widthwise, the level one gowns broke with less than 1 pound of force, and the level two gowns broke with less than 5, according to the study.

Several brands of reusable gowns passed both tests by comfortable margins, even after being laundered 75 times.

Meredith McQuerry, supervisor of Florida State’s Textile Testing Lab, who co-authored the study, said the failures of disposable gowns demonstrate the effect of standards “not being fully enforced.”

“One hundred percent this should not only constitute further study,” she said. “It most definitely should cause some alarm in the medical profession in terms of PPE concerns.”

Now, ECRI is undertaking a separate study in its Philadelphia laboratory that will repeat the tests of the academic one. In addition, ECRI said it will launch a survey through which health care workers can report gown failures. The organization also named “insufficient” disposable gowns one of its “top 10 health technology hazards for 2022.”

Tim Browne, ECRI’s vice president of supply chain solutions, said alarms began to sound amid the supply shortages at the start of the pandemic as desperate hospitals turned to gowns of questionable quality, often imported from Chinese companies.

In 2020, ECRI tested 34 gown models from foreign and “non-traditional” suppliers and found that about half the gowns did not meet their claimed protection level and half failed to meet even the lowest standard, according to documents provided by the organization.

“There was more fraudulent product in the marketplace than ever,” Browne said, “and that’s what really raised the level of concern from a quality standpoint.”

Although the supply chain issues of 2020 triggered doubts about disposable gowns, they were reaffirming for hospitals that years ago transitioned to reusable alternatives.

Officials at UCLA Health and Carilion Clinic, a seven-hospital chain based in Virginia, both of which are outspoken proponents of reusable gowns, said they had no shortages and simply laundered faster to keep up with pandemic demand.

The hospital groups also said they were insulated from surge pricing, which at times drove the cost of a single disposable gown from about 80 cents to nearly $3.

Lantz said UCLA Health had prevented approximately 1,200 tons of waste and now saves $450,000 a year after transitioning its inpatient units and emergency rooms to reusable gowns.

At Carilion Clinic, reusable gowns were saving the hospitals about 40 cents per use even before the pandemic, said Jim Buchbinder, the company’s director of laundry services.

“Forty cents a gown when we’re using 120,000 gowns a week during the pandemic — that’s substantial,” Buchbinder said. “Plus, we had them to wear. We weren’t wearing trash bags at Carilion.”

State and local governments have made transformative investments with American Rescue Plan recovery funds in 2022: A tighter focus on working families and children will have the greatest impact going forward

Strategies for Dealing with Difficult Coworkers

Amazon’s ‘Thursday Night Football’ Coverage to Be Tracked by Nielsen